I’ve always found the saying, “When you know, you know,” frustrating. What if I think I know, but I’m not sure?! I’ve come to realize that if I’m not sure, I’m not ready.

The “right” next step for Claire’s schooling is something I struggled with for months, maybe a year. Should I continue to homeschool? Could we get past the roadblocks we kept facing with her daily learning? Were there good options on island? Even if there were, would they be what she needed?

We started researching schools here in Grenada in order to make a fully informed decision. We toured the best options, spoke with staff. Even then, we did not pull the trigger. It would be such a huge change, and I just wasn’t sure. Until a few months ago, when I was. It was time for Claire to start traditional school.

It’s important to set the stage by explaining why we decided to homeschool in the first place. It was NOT because we don’t have faith in the public (or even private) school system (in the States). Prior to boat life, we lived in a suburb of Chicago that has excellent public schools, where we would have happily sent Claire. Some parents choose to homeschool because they feel they can do a better job educating their children themselves, and while I respect that opinion, I do not share it. But Aaron and I decided to pursue a lifestyle based on travel, and when you don’t stay in one place, school must be as fluid as your itinerary.

I also want to clarify that Aaron was very involved in Claire’s schooling, especially in the first three years, and has his own feelings about the successes and challenges of it all. The ones expressed here are my own.

Claire was 4 years old the summer we moved aboard Clarity. She had completed one year of preschool and would have done another before starting Kindergarten. Though I am not a teacher, I felt confident that we could continue her learning through those grades, at least. The concepts were basic and the seeds we would be planting with our travels would far exceed any challenges we might face in teaching.

The first few years went well, but as she got older, it got harder, in every way. The subjects became more challenging to teach. Which math curriculum would work best for Claire? Which reading curriculum aligns with her strengths and weaknesses? How do I create structure for the week, throwing in other subjects as well?

It helped immensely when we found the right reading and math programs for her that included daily lesson plans, but the rest was still up to us. There are homeschooling curriculums that cover all subjects, but they are expensive; needed a solid Internet connection and healthy amounts of data, which was never a given while cruising; and required that the student spend much of the day in front of a screen, which was not what we were shooting for (this was pre-Covid, mind you).

Another challenge that developed as we progressed was Claire’s inability to view me as “teacher” rather than “mom.” Her preschool had been Montessori based and she had never been in a formal school, where the expectations of what you should be doing, and when, were understood and respected. As the concepts we explored became more challenging, pushback from Claire increased.

For some reason, still completely elusive to me, Claire did not grasp the idea that if you focused and got your work out of the way early, the rest of the day was yours. Instead, it became a daily fight.

At formal school, the student would want to avoid the consequences, or he or she would simply see that the other students don’t behave that way. But when the teacher is your mother and you’re sitting at the same table that you had breakfast at, and would draw at later, and that mom works at sometimes, and that you build Lego creations on, the lines are blurred.

Teachers have been trained in how to handle these (normal) behaviors in students. I did my best to research alternative methods and try different techniques to better foster respect and learning, but my Internet browsing did not take the place of formal education in the trade.

When speaking with some of the other cruising parents about the challenges I was facing, they suggested child-led education, unschooling, etc. – just focus on what she enjoys and shows interest in, to foster that love of learning! I wish I could have embraced those ideals, but I still felt strongly that Claire needed to learn to read, whether or not she “liked it,” and basic math skills were an important part of becoming a functioning member of society, even if she’d rather do art all day. I also really didn’t like the idea of rewarding her pushback. So, we continued on.

I know this is all sounding negative, and I don’t mean for it to. We have had some really great days, even weeks, and equally as important, our travel and lifestyle created a much bigger picture of life and humanity for her than she could have experienced back in that suburb of Chicago. I also don’t mean for it to sound as though there is “blame” here on Claire’s mindset when it came to school. Certainly they were all learned behaviors developed as a result of the lack of structure, adaptability, and patience on the part of her teacher.

You see, it wasn’t just Claire and I in this homeschooling relationship. It wasn’t even just Claire, Aaron and I. There was another player that had just as big of a role. The boat.

For most cruising families, there’s a clear separation of roles. One parent handles the homeschooling and much of the day-to-day chores, and the other parent takes care of the boat. Both are full-time jobs. The boat requires daily and monthly maintenance, and things break. Constantly.

A turning point for us came when Aaron started working full time over a year ago. He did what he could in the evenings and on the weekends to maintain the boat, but he only had so much time, so I needed to take on more of those responsibilities. And I still had the usual chores: Handwashing the dishes, cooking all of the meals, handwashing the laundry. Many of the chores that you embrace as part of living that “simple life” take exponentially more time to complete when done by hand. If only I could have thrown the laundry in the washing machine and let it run in the background while we did a school lesson.

And of course, the boat would still break. A lot. Claire, get out your reading books! Just kidding, I have to figure out why the salinity is so high on our watermaker. Claire, it’s time for math! Wait – there’s water in the bilge. Why is there water in the bilge? Is it fresh? Is it salty? Sorry, Claire, this takes precedence. Let’s do a science lesson today! Hold on, the fridge isn’t working right. The temp is rising. Our food will spoil if we don’t get this under control. We’ll have to push science to tomorrow. The boat always wins.

Too often, I found myself having to put school on hold to attend to boat problems, or even just boat needs. School became more jumbled and we couldn’t settle into a routine or rhythm. Even when we did get back to it after a crisis was averted, my patience was shot.

I was not giving her my best anymore, and I knew it. I was burnt out, and ultimately, she wasn’t learning. The scale had tipped. Too many days were ending in frustration on both ends, rather than success.

Let me say here that many cruising families do homeschooling successfully, and I think we could have, too, if our circumstances hadn’t changed. It’s when one parent is working full-time that the challenges become much greater. The responsibilities that required two people full time did not go away or lessen. One person can only do so much, only so many hours in a day.

Aaron’s business had been going very well, and we had decided to stay in Grenada at least another year. With us no longer actively cruising, our original reason for homeschooling – the need for flexibility – was no longer a factor, and we also weren’t experiencing the joys or benefits of cruising: exploring new places, learning about new cultures by immersing ourselves in them. We had already visited the schools on island and identified the one we felt would be a great fit for Claire. The writing was on the wall.

I’ve known that this change needed to be made for awhile. Still, it was so hard. I struggled not to see it as a failure on my part. I still feel that way sometimes. It was hard to admit that I would be doing a disservice to her if we didn’t make a drastic change. I was defeated and ashamed that Claire and I continued to struggle in these roles. But thank God, I got out of my own head and realized that that was all about me.

The only decision to make was what would be best for her. My job as a parent didn’t have to be leading her education. In fact, it needed to be fostering her education by identifying a community, a school, where she could thrive, and doing all I could to help her succeed there. She needs to be among her peers, learning and exploring, regardless of whether or not the toilet on the boat stops working, or two loads of laundry need to be handwashed and I can’t make enough water to do it. She needs to just focus on her.

And I need to be her mom again. Not her teacher, but her mom. It’s a role that’s been too clouded by other things in the past year or two, and one I haven’t prioritized enough. I need to do better, and I’m recognizing that though we set off on this journey for the incredible gift of spending these days together as a family, right now, in this chapter, a little space and distance during the day that allows us to spread our own wings will actually bring us closer.

It will be a challenging transition from such flexibility to such structure and routine. Starting each day from the boat, in the dinghy, to shore, to the car, then to school, drop-off by 8 a.m., back at 3 p.m. for the reverse. Five days a week. Uniforms, packed lunches, homework. It will all be worth it.

So, Claire will start 4th grade at Grace Lutheran School in Grenada, West Indies in September. She is anxious but excited. I am, too.

2 thoughts on “Back to School! This time, on land.” 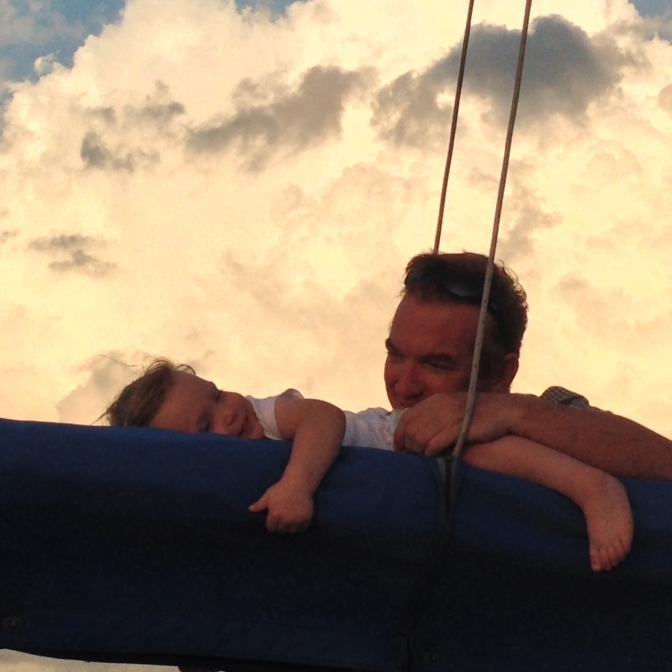 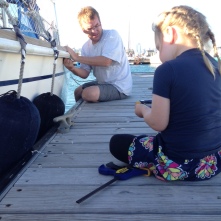 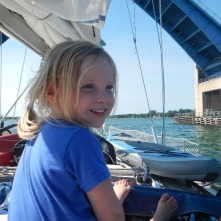 Claire was enthralled as they raised the Bayview Bridge so Clarity could pass underneath on the way to the marina. 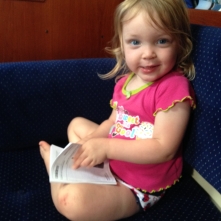 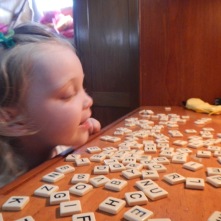 Rained In – Time for Bananagrams! 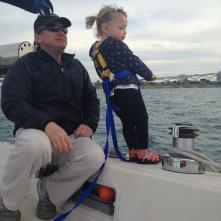 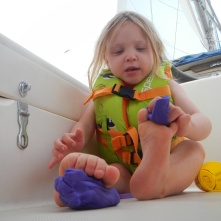 Play-Doh – a great way to keep a kiddo entertained in the cockpit for at least an hour! 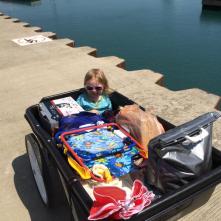 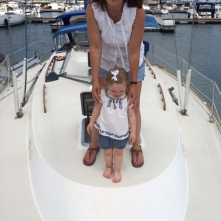 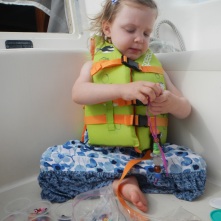 Beading While Under Way

Making a full breakfast during our sail from Port Washington to Sheboygan. With a phantom hand – Claire really wanted that bacon! 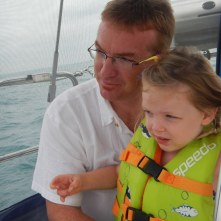 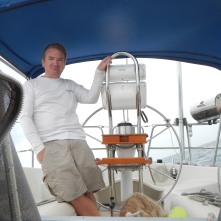 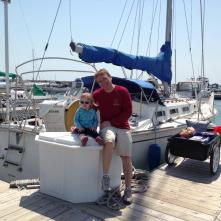 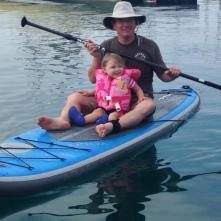 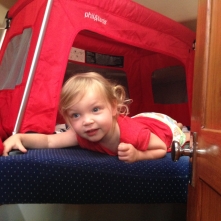 Halfway through our seven-hour sail to Milwaukee, the sun broke through the clouds.